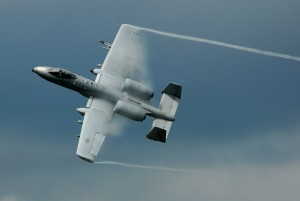 Hawgsmoke traces its heritage of the now discontinued “Gunsmoke” event. Gunsmoke was the USAF’s air-to-ground gunnery and bombing competition with multiple airframes held at Nellis AFB. The last Gunsmoke event was held in 1995. The inaugural Hawgsmoke was in 2000 at the Alpena Combat Readiness Training Center in Michigan. It was hosted by the Michigan ANG’s 172nd Fighter Squardron from Battle Creek. Col. Cliff Latta of the 172nd is credited with initiating Hawgsmoke.

Hawgsmoke 2002: Four-ship teams of airplanes and pilots from A-10 units around the world flew and competed for the h

onor of being the ‘Best of the Best’ in ground attack and target destruction. Top Team honors went to the Connecticut ANG and they in turn hosted the next event, Hawgsmoke 2002, at the Fort Drum Forward Operating Location in New York State. There, 17 teams and 62 aircraft competed, with the overall winner being the four member team from the 47th Fighter Squadron at Barksdale AFB, LA. The 47th had come in second in 2000 and were determined to make up for unfinished business. Hawgsmoke 2002 focused on accurately dropping BDU-33s practice bombs, firing the AGM-65 “Maverick” missile, and strafing proficiency with the 30 mm Gatling gun. Much emphasis was placed on target acquisition as well.

The third event, 2004 Hawgsmoke, was hosted by the 47th FS “Dogpatchers” and held at England Air Park, formerly England AFB,in central Louisiana. 18 teams and over 70 aircraft made the trip in anticipation of the competition, camaraderie, and celebration of the world’s premier CAS aircraft.

Unfortunately, the competition was undone by forces of Mother Nature and the bad weather resulted in Hawgsmoke 2004 becoming known as Hawgwash 2004. Nevertheless, it was declared a success for the opportunity of the Hog community to get together, share experiences and party like rock stars.

With no winner from “Hawgwash”, the 355th Fighter Wing picked u

p the slack. Hawgsmoke 2006 was held 22-25 March at Davis Monthan AFB in Tucson, Arizona. Adding even more to the luster of Hawgsmoke. The 2006 installment marked the 30th Anniversary of the A-10 and served as a homecoming for all Hawgdrivers due to the fact initial A-10 training is carried out at DM. With over 140 aircraft are on the ramp, the event went off without a hitch. After the scores had been tallied, the 303d Fighter Squadron from Whiteman AFB, MO emerged the winner.

The Hawg Drivers from Boise took the title at the 4th event, so they hosted an outstanding event in 2010. Practicing at thei

r home range for months on end, they were able to walk away victorious yet again, but not without the 354th Bulldogs hot on their heels. By regulation 11-202vol69, the hosting team is not allowed to host twice in a row, so the Bulldogs hosted in 2012.

The Bulldogs brought the fight back to the desert in 2012. Upping the level of difficulty, the Bulldogs decided to withhold the schedule of bombing and shooting e

vents until the day prior to flying. Teams would then have to train to all disciplines: CCIP and HARS bombing and shooting, Maverick, and a timed low-level event. Emerging victorious in 2012 were the IPs of the 357th Draggins, who hosted in 2014.

ster, so until someone sends him the results or some more information, all we have is this patch:

…however, the Termites kept the trophy in the desert, in 2016 and were able to secure yet another victory in 2016!

In 2018 the KC Hawgs hosted Hawgsmoke with great success, the 74th FS emerging victorious, and in 2020 they will be hosting the event.