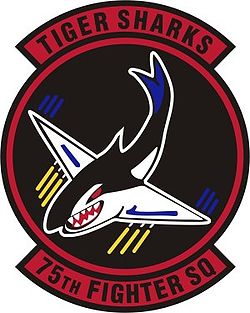 The Japanese were bombing Hengyang, China, nightly when the town’s mayor asked that we intervene to end the attacks. On July 4th, 1942, the same day of the 75th Fighter Squadron’s activation, the unit performed the first ever night interception flights over China against Japanese bombers. The 75th excelled and was credited with two bombers shot down and two probables! In appreciation for the success of the mission, the Mayor of Hengyang presented each member of the 75th Fighter Squadron a ring engraved with the image of a shark.

The shark on the ring inspired an orderly room clerk, SSgt Robert E. Ceperley, better known as “Cep”, to redesign the shark as the 75th Fighter Squadron’s insignia. The insignia became so popular that the squadron’s pilots and ground crew asked Cep to paint the shark on their aircraft. Major elements of his original design are included in the current squadron patch.

The deadly Tiger Shark diving with guns blazing represents the power and aggressiveness with which the attack is brought upon the enemy. The black background signifies the might and determination to protect friendly forces while attacking enemy targets. The red memorializes the sacrifice of members of the 75th in past and future combat operations. The yellow gun flashes signify the unit’s striking power, and the blue tail flash, wing flash, and airflow off of the wing tips represent the sky, the Air Force’s primary theater of operations.