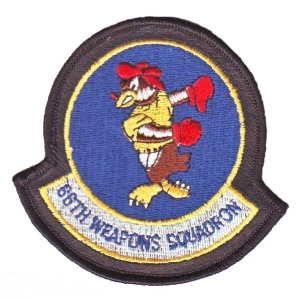 Formed as a P-40 Warhawk pursuit squadron in January 1941 as part of the Army Air Corps Northeast Defense Sector (later I Fighter Command) at Mitchel Field, New York. Trained in New England and provided air defense of the northeast after the Japanese attack on Pearl Harbor.

Was reassigned to the U.S. Army Middle East Force in Egypt, July 1942, becoming part of IX Fighter Command. Took part in the British Western Desert Campaign, engaged in combat during the Battle of El Alamein and, as part of Ninth Air Force, supported the Commonwealth Eighth Army’s drive across Egypt and Libya, escorting bombers and flying strafing and dive-bombing missions against airfields, communications, and troop concentrations until Axis defeat in Tunisia in May 1943. The unit participated in the reduction of Pantelleria (May–June 1943) and the conquest of Sicily (July–August 1943).

The squadron supported the British Eighth Army’s landing at Termoli and subsequent operations in Italy, being reassigned to Twelfth Air Force in August 1943. It flew dive-bombing, strafing, patrol, and escort missions.

In 1944, converted to P-47 Thunderbolt aircraft and flew interdiction operations in Italy. They moved to Corsica on 30 March 1944 to operate as a separate task force. It flew interdiction missions against railroads, communication targets, and motor vehicles behind enemy lines, providing a minimum of 48 fighter-bomber sorties per day.

Participated in the French campaign against Elba in June 1944 and in the invasion of Southern France in August. It engaged in interdiction and support operations in northern Italy from September 1944 to May 1945.

The 66th flew its last combat mission on 2 May 1945. Remained in northern Italy after the end of the European War, demobilizing throughout the summer of 1945. It was reassigned to the United States in August 1945 without personnel or equipment and was inactivated at the end of August.

Reactivated in August 1946 as part of Eleventh Air Force (Later Alaskan Air Command) as part of the air defense forces in the northwest Pacific. Squadron began training new P-51 pilots at Elmendorf Field, Alaska. Later, it was equipped with F-80Bs in March–April 1948, F-80Cs in October–December 1948, F-94Bs in the summer of 1951, and F-89Cs in September 1953. With these aircraft, the squadron provided fighter aircraft defense in support of the Alaska Area until late in the 1950s.

Was reassigned to Oxnard AFB, California in 1957, but was never equipped or manned due to budgetary constraints, inactivated by Air Defense command, January 1958.

Remained in non-operational status until October 1977 when reorganized as an A-10 Squadron, tail coded “WA”, black/yellow checkered tail stripes. Performed fighter weapons training with the A-10 until the end of 1981, when inactivated and squadron was reassigned to the USAF Fighter Weapons School, being re-designated as “A-10 Division”.
Modern era
Reactivated in February 2003 as 66th Weapons Squadron (66 WPS), replacing USAF Weapons School A-10 division. Provides USAF Weapons School syllabus support, priority test mission support and road shows that visit various units throughout the CONUS to ACC units for training.