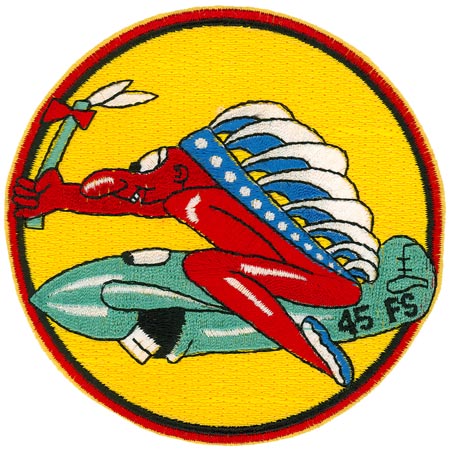 The history of the 45th Fighter Squadron goes back to November 22, 1940, when the War Department constituted the 45th Pursuit Squadron (fighter). The unit was activated at Wheeler Field, Hawaii on December 1, 1940, where they served as part of the 15th Pursuit Group in defense of Hawaii.

When the Japanese launched their surprise attack on Pearl Harbor on December 7, 1941, the 45th PS suffered heavy losses, as did the other squadrons in the 15th Group. Two-thirds of the P-36 and P-40 aircraft at Wheeler Field were destroyed right on the ground. Earlier, the planes had been stripped of ammunition and fuel, and taken out of their protective earthen revetments because of potential sabotage. Parked there in the open, the planes were easy targets for the Japanese pilots as they strafed and bombed the field.

Everyone on the ground scrambled for cover as the field was being hit, while at the same time pilots were trying to get their planes off the ground without too much success. However, Lieutenants George Welch and Kenneth Taylor, two pilots from the 47th PS whose planes were at Haleiwa Field at the time, were able to get their Curtis P-40B Tomahawks into the air soon after the attack began. Clearly outnumbered, they still managed to shoot down six Japanese planes.

Meanwhile, Captain Aaron Tyler, commander of the 45th PS at Wheeler, ordered his crews to pull out all the undamaged planes they could find and have them fueled and armed. Less than a dozen aircraft were available, but the pilots who were selected to fly wasted no time boarding their planes. They quickly took off, hoping to tangle with the Japanese fighters. After searching the area for almost an hour, all they saw as they flew over Pearl Harbor were the burning ships and immense damage. By this time, the Japanese planes were long gone, having already headed back to their carrier at sea.

In the days following the attack on Pearl Harbor, the pilots and ground personnel of the 45th PS had the job of cleaning up the mess at Wheeler Field. Among the first things they did was put the remaining aircraft back into their revetments. After moving their flight operations to different fields in Hawaii, the 45th PS was back in the air conducting daily air defense patrols over the islands. These long flights put a heavy toll on the P-36s and P-40Bs that the pilots flew, so they requested new aircraft. The pilots soon received new P-40E Warhawks and the tricycled-gear P-39 Airacobra.

On February 12, 1942, the squadron was redesignated the 45th Pursuit Squadron (Interceptor). Although the 45th PS still had as its primary mission the conducting of aerial patrols, it was also given the duties of conducting combat training for pilots. Three months later, on May 15, 1942, the antiquated term “pursuit” was dropped and the squadron was redesignated 45th Fighter Squadron. Over the next two years, the squadron would be involved primarily with combat training, and the job of air defense would take on a secondary role.

The 45th FS was sent to the Central Pacific in 1943 for combat operations against Japanese forces. Then, on April 6, 1944, the squadron returned to Mokuleia Field, Hawaii, and began training for very-long-range (VLR) bomber escort missions. By this time, the pilots in the squadron were flying P-47s. Later in the year they would acquire the longer range P-51 Mustangs.

In January 1945, the 45th FS was ordered into combat, along with the other assigned squadrons in the 15th FG. They left Hawaii for Saipan in the Marianas Islands, staying there until the Marines on Iwo Jima could secure a landing strip.

The first squadron to arrive at Iwo Jima was the 47th FS on the morning of March 6, with the 45th landing the next day. They supported Marine ground units by bombing and strafing cave entrances, trenches, troop concentrations, and storage areas. Before the month was over, the 45th FS began strikes against enemy airfields, shipping and military installations in the Bonin Islands.

Flying its first VLR mission to Japan on April 7, 1945, the 45th FS provided fighter escort for the B-29 Superfortresses that attacked the Nakajima aircraft plant near Tokyo. In late April and early May that year, the 45th struck airfields on the Japanese home island of Kyushu to hold back the enemy\’s Kamikaze attacks against the American invasion force on Okinawa. The squadron also attacked enemy troop trains, small factories, gun positions, and hangars in the Bonin Islands and Japan.

During the summer of 1945, the 45th FS was assigned to the 20th Air Force and continued its fighter sweeps against Japanese airfields and other tactical targets. It continued to fly long-range B-29 escort missions to Japanese cities until the end of the war. After the surrender of Japan, the squadron remained on Iwo Jima until November 25, 1945, when it transferred to Bellows Field, Hawaii. On February 8, 1946, the squadron moved to Wheeler Field, where it stayed until inactivated on October 15, 1946.

On September 11, 1952, the squadron was redesignated 45th Fighter-Interceptor Squadron and was activated on November 1, 1952, at Suffolk County AFB, New York. It replaced the 118th FIS of the Connecticut Air National Guard which was disbanded. The 45th FIS was assigned to the 519th Air Defense Group on February 16, 1953, as part of Air Defense Command (ADC). Their primary mission was in defending the American east coast from any Soviet threats. The war in Korea was still being fought at the time, but the main concern was still Russia and what it might do next.

The squadron had a short ADC commitment, however, as they were transferred to United States Air Forces Europe (USAFE) in French Morocco, North Africa. On May 25, 1953, the squadron left Suffolk County AFB and flew all their aircraft over to Sidi Slimane Air Base, which was a Strategic Air Command (SAC) base. Making stops along the way, the squadron arrived at Sidi Slimane AB on May 28. The base was shared with rotating bomber groups that flew B-47 Stratojet medium-range bombers.

Now part of the 17th Air Force, the squadron was attached to Air Defense Division on June 8, 1953. A short time later, on September 18, 1953, they were assigned to the 316th Air Division. The primary mission of the 45th at Sidi Slimane AB was flying air defense patrols off the coast of Morocco and around the Atlas mountains to the east. Pilots also took turns on alert duty in case an unidentified aircraft was spotted on radar coming towards French Morocco.

The squadron was redesignated 45th Fighter-Day Squadron on October 8, 1954. The pilots in the 45th FDS continued to fly the F-86F Sabre until March 1956, when they received new F-100C Super Sabres. Defense patrols were still carried out by the 45th until the end of December 1957. On January 8, 1958, the squadron was inactivated again.

On April 1, 1962, the squadron was redesignated 45th Tactical Fighter Squadron and activated a short time later, on April 17. They organized on May 8 at MacDill AFB, Florida, a former SAC base now under Tactical Air Command (TAC), and were assigned to the 12th Tactical Fighter Wing. They were transferred to the 15th TFW at MacDill on July 1, 1962. The 45th TFS flew F-84F Thunderstreaks for two years while at MacDill, then in 1964 received F-4 Phantoms. The mission of the squadron was conducting combat crew training, and they took part in many exercises, flight operations, and readiness tests. During the Cuban missile crisis in October 1962, the squadron temporarily reorganized as a combat-capable unit ready to strike Cuba if necessary. After the crisis was over, the squadron returned to its training mission.

In 1965, the 45th TFS was sent from their home base at MacDill to Southeast Asia. Under the command of Colonel William A. Alden, they arrived at Ubon Royal Thai AFB in Thailand on April 4. The 45th was the first F-4 Phantom II unit to arrive in SEA. They achieved another first a little over three months later, when on July 10, 1965, two F-4C Phantoms from the 45th TFS shot down two North Vietnamese MiG-17s. This was the first U.S. Air Force aerial victory of the Vietnam War. Captain Thomas Roberts was the pilot of one of the F-4s, and Captain Ronald Anderson was his backseat Weapon Systems Officer. Captain Kenneth Holcombe with Captain Arthur Clark as WSO piloted the other F-4.

The 45th TFS left Ubon on August 10, 1965, and returned to MacDill AFB. For the next five years they would serve as a replacement training unit (RTU) for F-4 pilots headed to SEA. On October 1, 1970, the 15th TFW was inactivated and the 1st TFW, which was formerly at Hamilton AFB in California, took its place at MacDill. The 45th TFS was assigned to the 1st TFW and continued their role as a training unit until they were inactivated on July 1, 1971.

On October 1, 1973, the 45th TFS was activated and assigned to the 434th TFW at Grissom AFB, Indiana. For the next eight years they would fly the A-37 Dragonfly, an upgraded version of the T-37 trainer with more performance and armament capabilities.

In 1981 the squadron transitioned to the A-10 Thunderbolt II, affectionately called the “Warthog” by those who flew it. On July 1, 1987, the squadron was reassigned to the 930th Tactical Fighter Group at Grissom, which became the 930th Operations Group. It was an Air Force Reserve unit, and they still flew the A-10. On February 1, 1992, the squadron was redesignated 45th Fighter Squadron. Known as the “Hoosier Hogs,” the pilots of the 45th FS flew their missions with pride up until September 1994. The squadron was inactivated on October 1, 1994.

In September 2010, the 45th FS will be activated and attached to the 917th Wing, which is based at Barksdale AFB, Louisiana. The squadron will fly the A-10 and be assigned to Davis-Monthan AFB in Arizona.

On a lemon-yellow disc, border equally divided tan and black, a caricatured red Indian, wearing light blue and white headdress and moccasins, holding forward in the right hand a red tomahawk with light green handle, trimmed white, while seated on fuselage of light green caricatured aircraft, having eye and teeth to form grinning face on nose of fuselage. (officially approved on August 24, 1944)