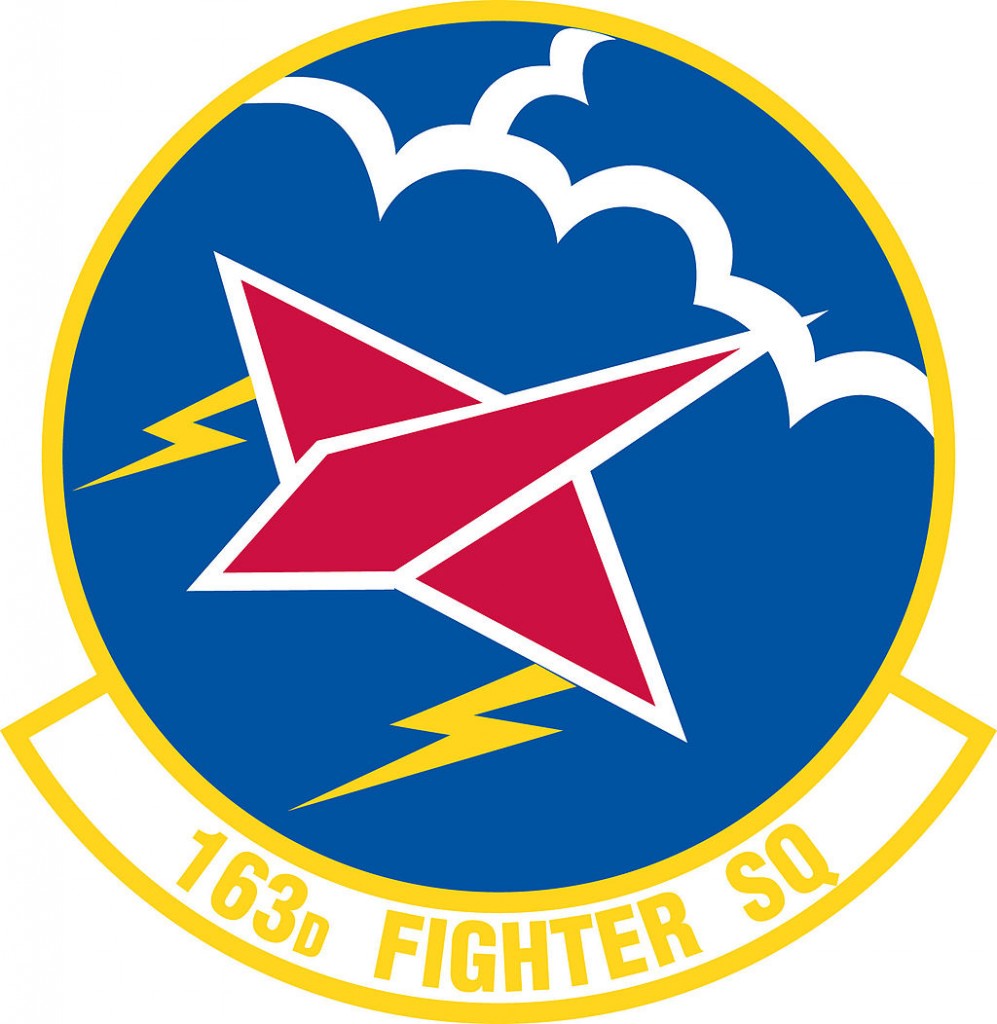 The squadron was first activated as the 365th Fighter Squadron on 1 January 1943 at Richmond Army Air Base, Virginia as one of the original squadrons of the 358th Fighter Group. The squadron initially began training with the Curtiss P-40 Warhawk. Later that year, the unit replaced its Warhawks with the Republic P-47 Thunderbolt, which it flew for the remainder of the war. The squadron left the United States in September 1943.

The 365th arrived in England during October 1943, where it began operations with Eighth Air Force on 20 December 1943, but was transferred to Ninth Air Force in February 1944. The unit engaged primarily in missions escorting bombers attacking targets on the continent of Europe until April 1944. The squadron then dive bombed marshalling yards and airfields and attacked enemy communications during April and May from its new station, an advanced landing ground at RAF High Halden, to help prepare for the invasion of Normandy.

The squadron escorted troop carrier formations on D Day and the following day as the formations dropped paratroopers on the Cotentin Peninsula. For the remainder of June, it attacked rail lines, troop concentrations, bridges and transport. The squadron moved to France in July and, from its base at Cretteville, took part in operations that resulted in the Allied breakthrough at St Lo. The squadron continued to fly escort, interdiction and close air support missions during the Allied drive across France and into Germany.

The squadron received a Distinguished Unit Citation for its actions between 24 December 1944 and 2 January 1945, when it supported Seventh Army attacking railroads and rolling stock, other vehicles and enemy artillery formations. It also destroyed numerous Luftwaffe fighters while defending against Operation Bodenplatte, an attack concentrating on forward Allied air bases in an attempt by the Luftwaffe to attain air superiority in the area of the Battle of the Bulge. In March, the squadron attacked German forces attempting to withdraw across the Rhine River, destroying motor transport and hampering the withdrawal efforts, earning a second Distinguished Unit Citation. The following month, the squadron attacked enemy airfields near Munich and Ingolstadt, engaging aircraft and supporting the advance of ground forces in the area, earning a third award of the Distinguished Unit Citation. The squadron was also awarded the French Croix de Guerre with Palm by the Government of France for its assistance in the liberation of France. The squadron was credited with the destruction of 27 enemy aircraft during the war.

In the case of the 163d, this was already the case in the F-4 and even in the F-100 days. In the early days of F-16 operations the emphasis was more on air defense than on the attack role. With the absence of modern targeting pods the deployment of air-to-ground weapons was somewhat hampered since other units had to be called upon to perform the target designation.
F-16C block 25 #84-1310 from the 163d Expeditionary Fighter Squadron, Balad AB, Iraq, 2006

In February 1993, the 122d FW successfully completed its first overseas deployment with the F-16C aircraft. The exercise, “Coronet Avenger,” took place in Egypt, and served as a training exercise, testing the capability of the unit to deploy and operate at an overseas location.

Fiscal Year 1994 saw the 122d FW participate in various humanitarian relief efforts throughout the world. Members of the base Hospital participated in Operation Sea Signal, which is the Air National Guard’s effort to support the refugees at Guantanamo Bay, Cuba.

In mid-1996, the Air Force, in response to budget cuts, and changing world situations, began experimenting with Air Expeditionary organizations. The Air Expeditionary Force (AEF) concept was developed that would mix Active-Duty, Reserve and Air National Guard elements into a combined force. Instead of entire permanent units deploying as “Provisional” as in the 1991 Gulf War, Expeditionary units are composed of “aviation packages” from several wings, including active-duty Air Force, the Air Force Reserve Command and the Air National Guard, would be married together to carry out the assigned deployment rotation.

During fiscal year 1996, the 122d FW was involved in a critical series of rigorous exercises designed to determine our operational readiness in mobility and war fighting capabilities. The 122d FW met every challenge and completed the Operational Readiness Inspection in September 1996 with outstanding results.
: F-16s assigned to the 122nd FW and the 127th FW are captured in formation after a routine refuelling from a KC-135R Stratotanker in 2009.

In 1997 the name of the squadron was changed from Marksmen to Blacksnakes. This was purely a political initiated change. The word ‘Marksmen’ somehow reflected an aggressive undertone which some found offensive. Although this wasn’t the case at all, the squadron decided to change its name into ‘Blacksnakes’. The tail scheme of the aircraft was changed accordingly.

In 2005 the squadron introduced a reconnaissance asset with the Theater Airborne Reconnaissance System (TARS) coming available to the unit. The 163d FS was one of a few ANG units to fly with this reconnaissance pod.

In 2008, after having flown for 17 years with the block 25 aircraft, a number of those came to the end of their operational lifespan. It was therefore decided that the aircraft of the 163d FS were to be replaced with more modern examples. More modern is quite relative since the aircraft they received were Block 30 F-16C/Ds manufactured between 1987 and 1989. These big mouth models were mainly coming from the Michigan Air National Guard 107th Fighter Squadron which was transitioning to the A-10 Thunderbolt II at the time. With the upgrade to the Block 30 aircraft, the tail code of the 163d was changed from “FW” (Fort Wayne) to “IN” (Indiana) in 2009 when the 181st Fighter Wing at Hulman Field became a non-flying unit. However, only a few of the F-16s were re-coded.

In 2009 – the year the unit honored its predecessor unit – the 358th FG – with an heritage jet – it was decided that the squadron was to retire their 20-year-old F-16s and become an A-10 Thunderbolt II squadron. The conversion happened in 2010.