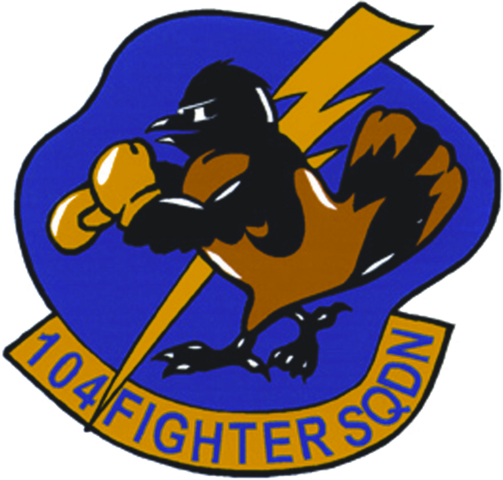 In personnel, if not in official lineage, the 104th Fighter Squadron can trace its origins to 1920 when the Flying Club of Baltimore was organized for former World War I Army Air Service reserve officers of that city. This club became part of the Maryland National Guard in 1921 when Maryland formed one of the nation’s first post-war flying units with the creation of the 1st Observation Squadron in Baltimore which received federal recognition on 29 June 1921.

Maryland became the fifth state to have a post-World War I National Guard aviation unit. The 1st Observation Squadron (a state designation) was re-designated the 104th Squadron (Observation) under the federal numbering system. At the time, the number 104 was widely used to designate combat support units in the Maryland National Guard, including the 104th Medical Regiment and the 104th Military Police Battalion.

The 104th became the first post-World War I United States National Guard unit to be equipped with its own aircraft, 13 Curtiss JN-4 Jennies, which it flew until 1923. Initially assigned as division aviation for the 29th Infantry Division, the unit operated out of Baltimore’s Logan Field. In addition to Jennies, the 104th flew a variety of other aircraft during the interwar period, almost all of them two-seat biplanes.

At the outset of World War II the 104th became part of the Antisubmarine Patrol used along the East Coast. Initially operating out of the Fort Dix Army Airfield, squadron was moved to the Atlantic City Municipal Airport, as part of the 59th Observation Group using O-46 and O-47 aircraft fling coastal patrol missions. On 18 October 1942, the 104th was inactivated and its personnel and aircraft transferred to the 517th Bombardment Squadron. The 517th was soon moved to Langley Field, Virginia, where it was re-designated as the 12th Antisubmarine Squadron and equipped with B-18 Bolo, and later B-24 Liberator and B-25 Mitchell bombers configured for antisubmarine attack missions.

By this time most of the original Maryland National Guard members had been transferred elsewhere as individual replacements, although a handful were still serving with the unit when it deployed to England in 1943, by which time the 517th Bomb Squadron had been redesignated the 859th Bombardment Squadron, part of the 492d Bombardment Group, Eighth Air Force, a B-24 Liberator group. There is no official lineage however, between the 104th Observation Squadron and the 859th Bombardment Squadron.

Meanwhile, the 104th Observation Squadron was reactivated with the 59th Observation Group. The squadron was redesignated as the 104th Reconnaissance Squadron (Fighter) on 1 March 1943. Equipped with P-39 Airacobras, the squadron was assigned to the 59th Reconnaissance Group, III Fighter Command. Its mission was to train newly graduated pilots from AAF flight training schools to fly single-engine fighter planes as a Replacement Training Unit (RTU). In August 1943, the squadron was redesignated as the 489th Fighter Squadron. However, those changes were administrative in nature, the mission of the squadron remaining the same. The squadron was inactivated and disbanded on 1 May 1944 as part of an Air Force reorganization of its training program. The squadron’s training mission subsequently was carried out by “Squadron B”, Thomasville Replacement Training Unit. With the end of the war, Thomasville AAF and all of its assigned units were inactivated on 30 September 1945.
Maryland Air National Guard
104th Fighter Squadron – F-47 Thunderbolts 1947

The squadron was one of the first in the Air National Guard and was operationally gained by the Air Defense Command First Air Force. As the ANG command and control echelons were formed, the 104th came under the operational control of the PA ANG 53d Fighter Wing, although administrative control was retained by the Maryland ANG.

By 1955 the Mustangs were at the end of their operational lifetime, and the Air Force issued a directive to ADC to replace all of its interceptor force with Jet Aircraft. As a result, the 104th entered the jet age and received Korean War veteran F-86E Sabres to replace its propeller-driven Mustangs, which were retired. However, Baltimore Harbor Field was unsuitable for jet aircraft due to the length of its runway, and the squadron was forced to temporarily base its jet aircraft at Andrews AFB, and later at Friendship Airport (now BWI Airport), while it looked for a new home. Eventually, the squadron relocated to Glenn L. Martin Company Airport on 1 July 1957 whose longer runway was necessary to support jet operations.
Tactical Air Command
104th Fighter Interceptor Squadron F-86Hs during 1968 Pueblo Crisis, Cannon AFB, New Mexico painted in Southeast Asian Camouflage Motif North American F-86H-10-NH Sabre 53-1511 in foreground, tail of 53-1255 also shown. 53-1511 now on display at Museum of Aviation, Robins AFB, Georgia

In 1957 the gaining command of the 104th was transferred to Tactical Air Command (TAC), and the squadron received the post-Korean War North American F-86H Sabre. The F-86H was a fighter-bomber version of the Sabre designed for TAC and was transferred to the ANG by TAC units being upgraded to the F-100 Super Sabre. The air defense of Baltimore and Washington, however, was retained as a secondary mission and the squadron remained under the administrative control of the PA ANG 111th Air Defense Wing, the successor unit to the 53d Fighter Wing. On 10 November 1958 the squadron was re-designated as a Tactical Fighter Squadron. The 104th flew the F-86H for over a decade, remaining in service until well after the United States had committed itself to the Vietnam war. However, no F-86Hs ever went overseas to participate in that conflict, the fighter-bomber mission in Vietnam being flown by F-100s, F-105s and F-4C Phantom IIs.

On 1 October 1962, the 104th was authorized to expand to a group level, and the 175th Tactical Fighter Group was federally recognized and activated by the National Guard Bureau. The 104th TFS becoming the group’s flying squadron. Other squadrons assigned into the group were the 175th Headquarters, 175th Material Squadron, 175th Combat Support Squadron, and the 175th USAF Dispensary. With the formation of the 175th TFG, all administration of the unit by the 111th ADW ended.

In 1970 the F-86H Sabres were transferred after being with the 104th TFS for thirteen years. The 104th was one of the last ANG units to fly the F-86. The Sabres, however, were not retired, but instead transferred to the United States Navy which used them both as target drones and as MiG simulators for TOP GUN aggressor training. The F-86H had a similar size, shape, and performance as the MiG-17 fighter then being encountered over North Vietnam, and many a Navy F-4 pilot was “killed” by a F-86H Sabre during these mock battles.
A-10 Thunderbolt II assigned to the 104th Expeditionary Fighter Squadron, assigned to the 455th Air Expeditionary Wing taking off at Bagram Airfield, Afghanistan, June 28, 2012.

In return, the 104th TFS received Cessna A-37 Dragonfly ground-attack aircraft. In the Vietnam War, the A-37 was a very effective ground support aircraft that was simple to operate, maintain and fly. The mission of the 104th was to train in the aircraft to support Air Force and Army special forces personnel and units. In 1974, after the end of American participation in Vietnam, the unit began supporting the Military Assistance Program (MAP) by supplying training to Latin American Air Forces. In addition, in the OA-37 configuration, the aircraft was used as a Forward Air Control (FAC) aircraft, that replaced the aging O-2 Skymaster. In the OA-37 configuration, the aircraft was equipped with small rocket pods, usually with smoke or white phosphorus warheads used for target marking.

In 1979, the 175th was the first Air National Guard unit to receive the A-10 Thunderbolt II ground support aircraft. The 104th received brand new A-10A Thunderbolt II attack aircraft from the factory in Hagerstown, Maryland. The unit continues to fly the latest version (A-10C) of the famed tank killer to this day.
Modern era

Early in the 1990s with the declared end of the Cold War and the continued decline in military budgets, the Air Force restructured to meet changes in strategic requirements, decreasing personnel, and a smaller infrastructure. The 175th adopted the new USAF “Objective Organization” in early 1992, with the word “tactical” being eliminated from its designation and becoming the 175th Fighter Group. Tactical Air Command was inactivated on 1 June, being replaced by the new Air Combat Command (ACC).
A 104th Expeditionary Fighter Squadron A-10 Thunderbolt II sits on the aircraft ramp ar Bagram Airfield, in Afghanistan, 2012

On 15 June 1996, in accordance with the Air Force “One Wing, One Base” directive, the units of the 135th Airlift Group and 175th Fighter Wing merged to form the 175th Wing. The 175th Wing became a composite organization with an Air Combat Command-gained fighter unit, an Air Mobility Command-gained airlift unit, a United States Air Forces in Europe-gained civil engineer flight, and, from 2006 to 2016, a network warfare squadron.

In mid-1996, the Air Force, in response to budget cuts, and changing world situations, began experimenting with Air Expeditionary organizations. The Air Expeditionary Force (AEF) concept was developed that would mix Active-Duty, Reserve and Air National Guard elements into a combined force. Instead of entire permanent units deploying as “Provisional” as in the 1991 Gulf War, Expeditionary units are composed of “aviation packages” from several wings, including active-duty Air Force, the Air Force Reserve Command and the Air National Guard, would be married together to carry out the assigned deployment rotation.

Following the terrorist attack of Sept. 11, 2001, members of the 175th Wing repeatedly volunteered or been mobilized to take part in the Global War on Terrorism. From January to June 2003, the 104th Expeditionary Fighter Squadron was formed and deployed to Bagram Air Base, Afghanistan, where it flew strikes against Taliban and al Qaeda forces and earned the distinction of being the longest-deployed Air National Guard fighter squadron at Bagram.